The Sixth Extinction by Elizabeth Kolbert

Posted by admin on September 22, 2015 in Related | Comments Off on The Sixth Extinction by Elizabeth Kolbert 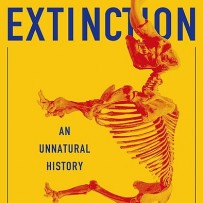 The Sixth Extinction: An Unnatural History is a 2014 nonfiction book written by Elizabeth Kolbert and published by Henry Holt & Company. The book covers past mass extinctions and demonstrates that the earth and humans are in the midst of a “sixth” mass extinction. She chronicles previous mass species extinction events, as well as specific species extinguished by humans, and she includes the accelerated widespread extinction of many species during our present time. Kolbert also describes prehistoric and historic ecologies surrounding prior and near-present species extinguishing events. The author received the Pulitzer Prize for General Non-Fiction for the book in 2015

The target audience is the general reader, and scientific descriptions are rendered in understandable prose for the lay reader. The clear writing blends explanations of her treks to remote areas with interviews of scientists, researchers, and guides, without advocating a position, while maintaining objectivity. Hence, the sixth mass extinction theme is applied to flora and fauna existing in diverse habitats such as the Panamanian rainforest, the Great Barrier Reef, the Andes, Bikini Atoll, city zoos and the author’s own backyard. The book also applies this theme to a number of other habitats and organisms throughout the world and its oceans. When researching the current mainstream view of the relevant peer reviewed science, she estimates flora and fauna loss by the end of this century to be between 20% to 50% “of all living species on earth”.

A major book about the future of the world, blending intellectual and natural history and field reporting into a powerful account of the mass extinction unfolding before our eyes.

Elizabeth Kolbert is an American journalist and author and professor at Williams College. She is best known for her 2006 book Field Notes from a Catastrophe, and as an observer and commentator on environmentali… More Wikipedia